The right songs, well performed for every audience

Graham has a huge repertoire of traditional songs, mainly from the North East of England.
Having started singing in the mid 1960's he has continued to build a wide and varied collection of songs. They range from the songs of the countryside, the mines and the shipyards to the ballads of the borderlands between England and Scotland.

Graham has almost 60 years of experience of performing, from the smallest of folk clubs to large concert venues. As well as solo performances and many years with Cockersdale he has run song and singing workshops, both privately and for organisations such as Folkworks. He has a great knowledge of his songs and brings them to life with humour and understanding.
Techspec (for those interested!) for performances couldn't be easier: Vocal mike (with fallback if possible in larger venues. Folk clubs generally acoustic). If booking the Miners' Union I need space for my multi media projector and a screen.
Graham also runs singing workshops that are not only fun, but also successful in improving voice and presentation. 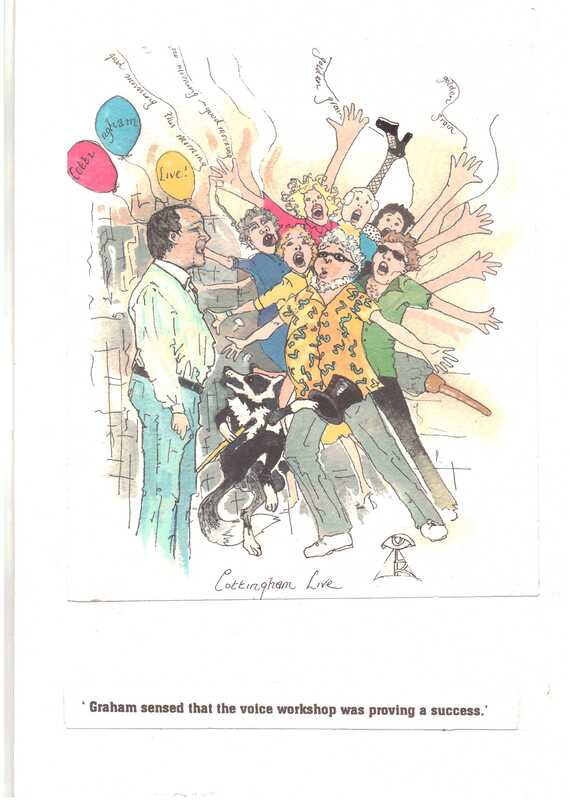 Sketch courtesy of Linda Kelly
THE MINERS' UNION
​Graham offers a multi media show on the history of the Miners' Union featuring songs and readings from the times accompanied by pictures and engravings of the events. Having performed this many times since the strike in 1984 it has always been very well received: "Graham’s presentation delves back to the history of the industry in the 13th century, and covering the tumultuous industrial struggles of the 20th century and the final demise of coal mining .  It’s a touring show and well worth booking." - Morning Star

One of the first performances of 'The Miners' Union' at the Topic Folk Club, Bradford in February 1985. You can tell the age because I talk about putting slides into the projector! It has been updated considerably since then with more songs and slides (now Powerpoint!) and taken up to the death of the industry, and was performed at Whitby Folk Week in 2018 as 'The Last Shift'
One of the tracks from Fyre & Sworde - Songs of the Border Reivers
Actually it's me singing, not Linda - she's on another track!!
​
Some of the work with Cockersdale where I am taking the lead vocal rather than the harmony

Some of my self penned songs

Sykehouse Bridge - From my time living near the Aire & Calder Canal in Goole
Jarrow Song - I was born and bred in Jarrow, with close associations to those in the Jarrow Crusade
Lost at 21 - My mother drove the air crew to the bombers at RAF Scampton and others. The cover photograph shows the photograph album in the song.
Race Against Time - after Craghead Colliery was closed we moved back to my birth town of Jarrow. This was written in honour of the men in my family who worked, and those who died, below the soil.
One of the tracks from 'Dance ti' thee Daddy' with Sam, my son
Here's a great song by Ed Pickford - Eee Aye Aaa Cud Hew - Another with my son Sam Pirt
And another one
This is a tribute I did for VE day. - 3 songs: The first one about my mother's experiences in the WAAF - Lost at 21, written by me, St Aubin sur Mer and Normandy Orchards, both written by Keith Marsden
Here is the last performance of Cockersdale at Whitby Folk Week in a celebration of Keith Marsden's songs. This was 2011, the 20th anniversary of Keith's death on his return from Cockersdale's visit to Sidmouth.
Proudly powered by Weebly
Proudly powered by Weebly